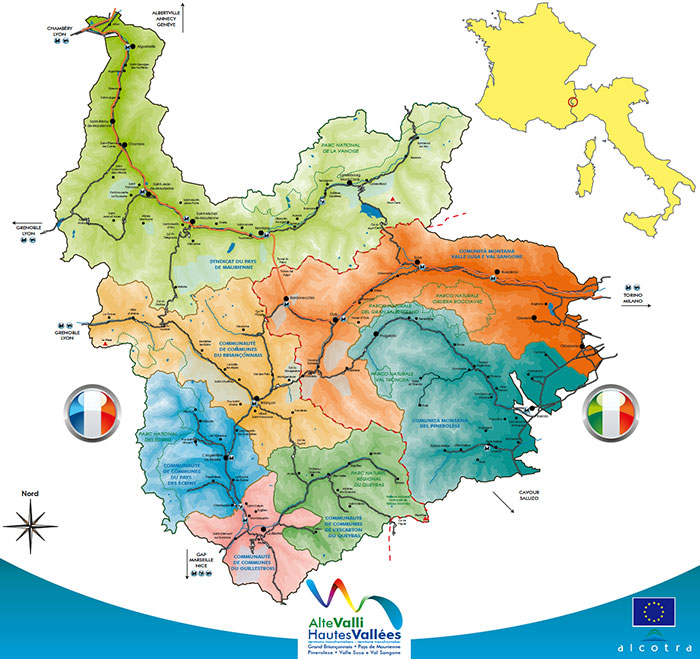 The process of establishment of the High Valleys Conference

The intercommunal structures of Pinerolo , the Sangone and the Susa Valley , the Grand Maurienne and Briançon are the Upper Valleys Conference , a partnership between public institutions that have embarked on a long process of collaboration using since the early ' 90 tools made ​​available by the first INTERREG programming .

This vast territory of the High Valleys is stronger than a common history linked to Escartons , the Occitan language and the historic French domination of the Valleys . The geological and geographical homogeneity of the massive mountains of the Hautes Alpes also determined the affinity between landscape and environmental resources , and the socio-economic reality of the territories is also very similar : on both sides of the Alps , is based on a major tourist winter as far as the upper part of the valleys and a good presence of industrial, entrepreneurial and craft in the valley .

The local Italian and French have considered it important to start from the beginning phase of confrontation and shared vision based on cooperation between neighboring regions directly in order to reduce the "distance " due to national borders, with the INTERREG programming I. Co-operation is then continued over time , thanks to new tools for international cooperation : INTERREG II and III.

In opening the new phase of the INTERREG III program , the local authorities have decided to adopt a more articulated to seize the best new opportunities in the programming document : with the Cooperation Protocol signed at Oulx on December 14, 2000 , was born the " Conference of the High Valleys " voluntary instrument that combines in a single assembly references the political and technical aspects of cross-border areas .

Based on the critical issues identified , the results achieved and the potential link to the next EU programming , local authorities participating in the Conference decided to renew commitment to cooperation through the signing , which took place in Briancon May 9, 2005 , a new protocol to strengthen cooperation.

The constitution of the Association of Upper Valleys Conference

To give an operational cross-border cooperation , the community members to the Conference September 4, 2007 have been set up in association called " Association of the Conference of the High Valleys " - CHAV

The C.H.A.V. has its registered office in Oulx, Montgenevre Via , 35 , is based in Briancon, 1, Rue Aspirant Jan and tax domicile in Perosa Argentina , Via Roma , 22.

General Council is made ​​up of the directors nominated by the members at the rate of one member and one alternate member for each community member.

Governing Council was appointed by the General Board and consists of six members ( a president, a vice-president and four members ) .

Technical Group , which ensures the operational organization and is made ​​up of technical institutions Italian and French.

The territory of reference

The area of ​​the Upper Valleys Conference includes the French side in the Communautes Briançonnais de Communes du , du Pays des Ecrins , Guillestrois du , du Queyras ( Département des Hautes -Alpes ) and the Syndicat du Pays de Maurienne ( Département de Savoie ) ; on the Italian side , the entire territory of the Valleys Pinerolesi , Susa and Sangone ( in the Province of Turin).

It is an area that extends for about 640 thousand hectares, of which 410 000 230 000 belong to France and Italy , an area slightly smaller than the whole territory of the Province of Turin.

The territory of the Conference of the High Valleys is located in the heart of the Western Alps , an area almost entirely mountainous , which reflects both the influence of northern Europe is Mediterranean influence . The territory in question is approximately one hour from major cities such as Turin and Grenoble, and in about two hours from the sea ( the Italian Riviera and Cote d'Azur) . The majority of the population is concentrated in the Lower Susa and Pinerolo on the Italian side and in the Briançon in the French part , with a significant imbalance between the two sides of the border , with 175,000 inhabitants on the Italian side , and 75,000 in the French side , for a total of 250,000 inhabitants, distributed in 175 municipalities .

This large area has within it a number of features that allow you to identify three areas in a rather significant that can be defined as :

The Conference Upper Valleys , for the experience, promotes the area and its development program with a view to integrated design, with the following advantages:

4 . SERVICES TO THE PUBLIC